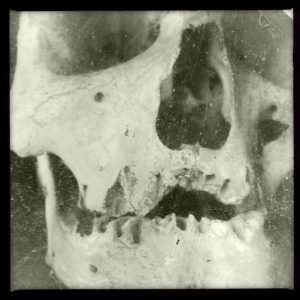 For thousands of years across many different cultures across the world people have believed that the head or skull has held the soul. Some tribes would preserve the skulls of their fallen enemies and the Celts would decorate their shrines with skulls.

In Britain we have a strange folklore of skulls that scream if taken from the location that they are held.

At Wardley Hall in Lancashire the skull of 16th century Catholic martyr Father Ambrose Barlow is on view at the head of the staircase with the legend that if anybody removes it the skull will emit a blood-curdling scream!

Burton Agnes Hall in Yorkshire has another screaming skull legend, this one belonging to Anne Griffiths. After being attacked and beaten by robbers, Anne in her dying breaths expressed the wish that her head should be buried in the home that she so much loved. Nevertheless her family buried her in the village churchyard.

After the funeral, terrifying groans and poltergeist activity such as doors slamming and crashes were heard around the house. The dead girl’s body was exhumed and her skull was exhumed and bricked up in a wall off the staircase. Although in recent times the skull has been on display without any side effects.

Bettiscombe Manor in Dorset probably has the most famous screaming skull legend in Britain. In the 18th Century, a member of the Pinney family returned from living in the West Indies and returned with a black slave. Shortly after returning the slave died after making his master swear that he would be buried in his homeland. The Squire broke his promise and the slave was buried in the local churchyard.

Similar to that of the Burton Agnes Skull, the skull of the slave began to make agonising screams that so much disturbed passers by that they asked the Squire to make amense. Since then the skull has remained on show at Bettiscombe Manor.

As with many legends the truth is often very different from the legend. Analysis during the 1960’s confirmed that the skull was in fact 2000 years old and was that of a girl. The legend remains intact that if the skull is ever removed from the manor the person who moves it will die within a year.

The power of the death’s head certainly dates back to pre-history and when our ancestors believed that the skull contained the soul but also the skull is very important in magic.

In Papua, widows would impale their dead husband’s skulls on poles to ward away spirits and unwanted attention. In England the trail of the witch Anne Chattox, head of a family of Lancashire Witches was accused of digging up three skulls from a churchyard to use in some ritual or demonic recipe. For this she was hanged.

The Celts often took the heads of enemies killed in battle, and kept these both as trophies and as offerings to the gods. The great stone shrine at Roquepertuse had skull-niches in the wall, some filled with representations of heads and others filled with actual skulls.

Throughout the years the skull has been seen as a mascot, trophy or charm and this is represented within the screaming skulls legends that still linger on, in England today. May 18, 2012 MJ Wayland Comments Off on A Yorkshire Ghost Charm Stonehenge Solstice from 1874 with Love July 19, 2015 MJ Wayland Comments Off on Looking for Sancti Rumwoldi