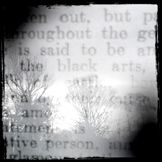 After purchasing “The Society of the Horseman’s Word” edited by Ben Fernee, I have been interested in this ancient order / early trade union / mystical society and its representation in the media. During my researches I found it interesting how the coverage is both negative and positive to the order, evidence I believe that the journalists themselves were hesitant to make negative accusations in case the order did indeed practise witchcraft.

This excerpt dates from 19th October 1934 and was published by the Evening Telegraph; “It is comforting to live in Britain, where such “secret societies” as are known, are more rationally minded.

The nearest to home apart from the Freemasons is the “Horseman’s Word,” which operates among farmers and ploughmen in Aberdeenshire, Banff, Elgin and certain parts of Angus.

The society is very ancient, but their activities have never been devoted to political strife.

The members meet in the open at night, and hold a kind of circus, using horses which are usually purloined from their master’s stables.

Here they learn the inner secrets of their work, and the result is that a member of the “Horseman’s Word” is always a more efficient worker than any outwith the organisation could be.  Secrets have never been written out, but passed by word of mouth throughout the generations.

There is said to be an inner circle who practise the black arts, and can dry up the milk of cattle, bewitch horses and sheep, and by their curses cause mysterious illnesses among the stock.  But probably this statement is only the work of some imaginative person, anxious to add a touch of evil glamour to the work of a very useful secret society.”

An earlier article dating from 11th April 1862 discusses the long art of the “horseman’s word” and how it has become a sensation in across the country. The Morayshire Advertiser wrote, “The secret is given to new hands at meetings called “brotherings” where not less than three of the previously “brothered” must be present as witnesses, or to impart instruction in the mystic principles.”

“The horseman’s word has been brought into ridicule and contempt among the well-informed who have not been brothered…they regard it as a system of useless symbols fit for nothing but to captivate the imagination of the young.  The writer had practised the art, and knows this to be a misapprehension.”

Sixteen years later James Robb wrote about the Horseman’s Word and the society’s whisper and that its use was quite widespread.  Published in The Graphic, 28th September 1878, James wrote, “My old friend, who in his early days was one of the most proficient in the art of whispering, has told me that he had known a lad entrusted with a pair of fillies just taken from the grass. He was able to plough all day and came back in the evening without injury to the horses, implement or man.  Without the talismanic whisper it would have been impossible to have accomplished such a feat.”

By the late 1800s and early 1900s, the newspapers begin to make a series of comments and alleged insights into this “secret society”, there is no doubt these articles are the probable origin of the reputation the society holds today.  The source of these allegations seem to come from two contemporary sources, Neil Roy’s fictional account of the “Horseman’s Word” a novel in which the society battle a horse headed, loch dwelling monster called the Kelpy (sic), and an article from a “North Country Correspondent” in the Pall Mall Gazette.  The correspondent claims to witness the taking of the oath near a mountain pass near Aberdeen as the society’s mysteries being revealed to him alone.

Ten months later on the Eve of the launch of Neil Roy’s book, both the Dundee Courier and Aberdeen Journal quote the article.  In modern times we would call this incredible marketing guile, especially to a public so unaware of actions.

On 12th November 1896, the Courier published, “Almost every ploughman in these counties (Kincardineshire and Aberdeenshire) is an expert horseman, the secret of which he was sworn never to reveal.  The organisation is known as the “Horseman’s Word” and with the exception of horse-shoers, no artisan, farmer or any class of men, other than those driving horses, are eligible for membership.   The initiation ceremony takes place invariably in a lonely place in the presence of three, five, seven nine, or eleven men – an even number being studiously avoided lest one should prove a Judas, and reveal the unwritten secrets of the art.”

The Aberdeen Journal, a day later published, “This is how the secret initiation ceremony of administering the “horseman’s word” in Scotland: Sentinels are placed to guard the approaches to the rendezvous, and the men to whom the oath is administered are blindfolded.  After the swearing in ceremony the men lie down upon the grass or straw, and speak without any order of procedure, the secret clasp of the hand and other signs being communicated to the latest members who are then instructed in the various methods of dealing with habitual kickers, biters, runaways, roosters etc.  The value of the whip being illustrated, a “subject” in the presence of a vicious horse being occasionally introduced, but with the exception of a plough cord, no straps or other tackle is used.”

No doubt this coverage helped sales of Neil Roy’s fantastical book, even the advertising (see left) is quirky by even our standards. I can’t help feel that the book also added to the prestige of the society, hence the details of the earlier article from 1938 in which it claimed that they were involved in the black arts.

Before I am deluged with comments claiming that it is an ancient society, I do agree, but with the Pall Mall Gazette article and subsequent quotes, and Neil Roy’s book, the “Society of the Horseman’s Word” became more about what it wasn’t, and sadly rather than what it actually was.